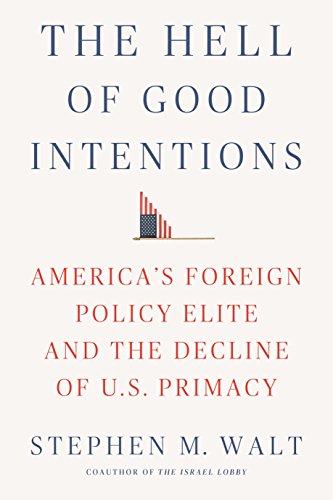 From the New York Times–bestselling author Stephen M. Walt, The Hell of Good Intentions dissects the faults and foibles of recent American foreign policy—explaining why it has been plagued by disasters like the “forever wars” in Iraq and Afghanistan and outlining what can be done to fix it.

In 1992, the United States stood at the pinnacle of world power and Americans were confident that a new era of peace and prosperity was at hand. Twenty-five years later, those hopes have been dashed. Relations with Russia and China have soured, the European Union is wobbling, nationalism and populism are on the rise, and the United States is stuck in costly and pointless wars that have squandered trillions of dollars and undermined its influence around the world.

The root of this dismal record, Walt argues, is the American foreign policy establishment’s stubborn commitment to a strategy of “liberal hegemony.” Since the end of the Cold War, Republicans and Democrats alike have tried to use U.S. power to spread democracy, open markets, and other liberal values into every nook and cranny of the planet. This strategy was doomed to fail, but its proponents in the foreign policy elite were never held accountable and kept repeating the same mistakes.

Donald Trump won the presidency promising to end the misguided policies of the foreign policy “Blob” and to pursue a wiser approach. But his erratic and impulsive style of governing, combined with a deeply flawed understanding of world politics, are making a bad situation worse. The best alternative, Walt argues, is a return to the realist strategy of “offshore balancing,” which eschews regime change, nation-building, and other forms of global social engineering. The American people would surely welcome a more restrained foreign policy, one that allowed greater attention to problems here at home. This long-overdue shift will require abandoning the futile quest for liberal hegemony and building a foreign policy establishment with a more realistic view of American power.