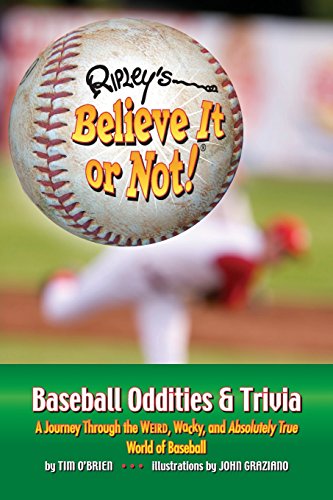 Páginas: 120 Géneros: 12:WDKX:Trivia & quiz question books 12:WTHF:Travel with children / family holidays 12:WSBX:History of sport Sinopsis: 'Ripley's Believe it or Not! and Tim O'Brien offer an offbeat and bizarre, but 100% factual journey through the world of baseball players, coaches, owners, teams, stadiums and fans! For the first time ever, Ripley has dedicated a book specifically to one of Robert Ripley's favorite subjects - baseball. Not falling into the category of a conventional trivia book, this one has the spirit of a traditional Ripley book throughout! No one does the odd and trivial better than Ripley! With a whole lot of totally unbelievable and mind-boggling facts, this Believe It or Not! book is a first of its kind in sports publishing. While best known for his artistic endeavors and the coining of the popular Believe It or Not! phrase, Robert Ripley's move to New York City in early 1914 marked his determination to play professional baseball. He tried out for the New York Giants in 1914 and made the team but had his pitching arm shattered by a line drive in his very first appearance. With his baseball career apparently over, he landed an illustrator's job at the New York Globe in the sports department where he soon was combining his passion for sports with his love for the odd and unusual. With more than 350 Believe It or Nots! and original illustrations by Ripley's official cartoonist John Graziano, the entire book is dedicated to the bizarre, colorful and entertaining universe of baseball oddities and trivia.'_,